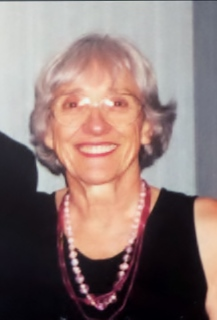 Ann Louise Enscoe, 89, died July 3, 2019 at Virtua Marlton Hospital in Marlton, NJ.  The daughter of the late James and Dorothy (Malaguti) O'Neil, Ann was born on February 22, 1930 in Middleboro, MA and graduated Middleboro High-School in 1948. She attended Barnard College in New York City before meeting her future husband, Gerry Enscoe, on a blind date. The two were married at St. Paul's Chapel at Columbia University on June 3, 1950 and moved to Seattle, Washington, where Gerry and Ann earned degrees at the University of Washington. They also lived in Detroit, MI, and Lancaster, PA, where they raised their two sons. Gerry was a professor at Franklin & Marshall College and Ann taught high school French and English. In 1971, Gerry took a job at the new Stockton State College in New Jersey while Ann earned a Master of Social Work degree at Rutgers. The couple retired to Boca Raton, FL in 1987. Gerry passed away in 2000 and Ann moved to New Jersey to be closer to family in 2012. Ann is survived by her two sons, David Enscoe and his spouse Ann Donio of Hammonton, NJ, and Christopher Enscoe and his spouse Cindy Carter of Earlville, NY, as well as four grandchildren, Adrian Blake Enscoe of Brooklyn, NY, Zoe Rose Enscoe of North Hollywood, CA, David Donio Enscoe and Jane Donio Enscoe of Hammonton, NJ. The family will hold a private memorial service at a later date.

Share Your Memory of
Ann
Upload Your Memory View All Memories
Be the first to upload a memory!