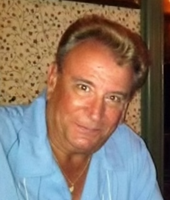 Harry Mazuk, 66, passed away on May 23 surrounded his by loving family. Born and raised in Philadelphia, Harry was a die hard Philadelphia sports fan. Harry was a one of a kind husband, father, brother, grandfather, great grandfather, uncle, cousin, brother-in-law, and friend. He is legendary for his stories and Harryisms. All who knew Harry appreciated his genuineness, sense of humor, love of life, as well as his advice both solicited and unsolicited. Harry loved family, music, cooking, eating, and making memories around the table, where everyone was made to feel welcomed and special. Harry lived by graciously and generously giving of himself every day. Professionally, Harry will be remembered for his music from the Young Ideas and over 25 years as the leader of Central Park the Band. From Harry's voice and sound, to the way he cared for his clients, his brides, and his band we know Harry's music will live on. Harry was deeply loved by wife Elizabeth (nee Neil) of over 34 years, daughter Michelle Pettey (Byron), sister Rita Mazuk-Ferguson (Bob), grandchildren Samantha Fischer (Brendan), Brandon, and Julian, his great-grandchildren Reese and Mila. Friends and family will be gathering on Thursday, June 2nd from 4pm-7pm at Carnesale's Funeral Home in Hammonton NJ. In lieu of flowers, donations can be made in Harry's name to the charity of your choice. Stay tuned for a Celebration of Harry's Life in one of his favorite places, Cape May Beach NJ.