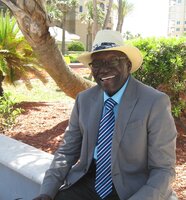 Kirby Spivey, Jr. was born on July 26, 1942, to Kirby and Martha Beatrice (Mullen) Spivey in the Bronx, New York. The family attended Shiloh Baptist Church in Harlem. Kirby enjoyed the outdoors and joined the Cub Scouts, including the blue with yellow trim uniforms. Despite living in a different borough, Kirby, Jr. and his younger brother George were avid Brooklyn Dodger fans; they cheered on Jackie Robinson with the radio placed on the window sill for better reception. In 1950, the family moved to Mizpah, New Jersey, along with several other members from the church. Kirby’s parents sought the safety, and green space the rural life south New Jersey offered. In this new environment, Kirby, Jr. participated in the 4H Club of Mizpah and joined Little League Baseball. Kirby played baseball, even when things weren’t exactly “right.” Kirby was going to buy himself a new glove, with money earned from picking blueberries. He went to the only store, Sears Roebuck in Vineland, and bought a “special” glove: the¬ only one available, one a left-handed pitcher would put on his right hand. Kirby bought his glove, no matter the “right” hand. His brother George was also right-handed, but caught with that left-handed glove. They played ball, no matter what! While baseball was his first love, football became his second love. After graduating from Vineland High School in 1961, Kirby played football for the Delaware State Hornets. In 1966, Kirby, Jr. found a new love, Lorraine Whiting, and they married on December 4, 1968. This union was blessed with three biological children, and one chosen by love. Kirby believed in helping others, but he also believed in “God helps those who help themselves.” All of his children picked blueberries by age twelve, and education was their number one priority. Kirby found one more love: bowling. He bowled two perfect games in his life, and has the rings to prove it. When he no longer could compete in sports, Kirby used his knowledge to coach and mentor many young athletes, especially those who participated in the Bethlehem Baptist Church (BBC) youth basketball teams. Kirby believed through sports and education, youth learned many life lessons. In order to play on the team, his athletes had to have passing grades; he made no exception for star athletes. Nothing lower than a C was acceptable. Kirby loved to win, but thought it more important to help his athletes prepare for life. He also knew that everyone could not be an athlete, but all children need extracurricular activities. He spearheaded the BBC youth choir who traveled to Philadelphia, Baltimore, Brooklyn, and many Jersey locations on the beloved church bus which he drove. Kirby also helped his fellow colleagues by protecting their rights when serving as steward for the union. Mr. Spivey is survived by his wife, Lorraine Spivey (52 years!), his children, Frank Blakeney (Henrietta), Karen Sylvester (Marlon), Gayanne Spivey, and Dr. Kirby Spivey, III (Amanda); fourteen grandchildren, five great grandchildren, seven God children and a host of nieces, nephews, and cousins. Funeral services will be held at Chestnut Assembly of God, 2554 E Chestnut Ave. Vineland, NJ 08361. Funeral at 10 am, with viewing the prior hour. Internment at Bethlehem MB Church Cemetery immediately following the service. Repast at MLK Center on Jackson Rd. Newtonville, NJ. MASKED REQUIRED