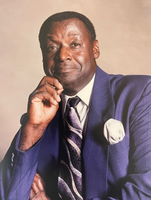 Eugene Stalling (Gene) 83, went home to meet his Lord on May 30,2021, at his home in Newtonville, N.J. Gene was born April 14, 1938 in Harlem, New York, the son of Charles and Madie Stalling. His family relocated to South Jersey while Gene was still young and he was formally educated in the Pleasantville School District. He was drafted into the Arm Services of the United States in 1960 during the Vietnam War. He was Honorably Discharged in 1963 receiving a medal for Good Conduct as well as receiving the Marksman Badge. While serving his time in the Army he married Gerladine Erwin on December 31,1962. From that union they had two children, Derek Levin and Darrin Lamont. Gene worked at various jobs after being discharged from the Army which includes working at Ancora Hospital and the Atlantic City Electric Company. Gene, who was very skilled with his hands, went on to start his own carpentry business with his younger brother Paul entitled Stalling's Building and Remodeling in the late 1970's and spent 25 years as a part-time bus driver for the Buena Regional School District. Gene served as a Deacon and the Chairman of the Board of Trustees at Bethlehem Missionary Baptist Church and was an active member of men's choir. Along with his wife Gerladine, they fostered children in Atlantic County for over 20 years while continuing to keep in touch with many of them after they became adults. Gene leaves behind his wife of 59 years, Geraldine (Erwin), his son's Derek (Rochelle) and Darrin (Nicola), his sister Arlene Holland, 10 grandchildren: Rochelle, Roshanda, Anthony, Shyniquia,Derion, Denise, Layla, Charles, Sahmaria and Tylah. He was preceded in death by his brothers Donald, Curtis, Paul, Gary and David, sisters Evelyn and Roberta and granddaughter Shawntay and leaves behind a host of nieces and nephews. Graveside Services will be held Friday, June 11, 2021, 1:00 PM in Greenmount Cemetery, 124 S. First Road, Hammonton, NJ.